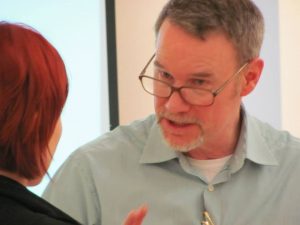 I’ve been involved in the area of performance since I was 12 years old.  I have a  B.A. in Theatre from the University of California at Los Angeles (1975-79) and trained as an actor at the Bristol Old Vic Theatre School (1980-82) and worked professionally as an actor for over 20 years.

I’ve trained hundreds of singers in my workshops, in private lessons, the Wales International Academy of Voice, the Royal Northern College of Music, and at the Trinity Laban Conservatoire, and by coaching opera companies. I’m often surprised by how little singers actually understand of what they are singing about. Their focus is almost entirely on the technicalities of how to sing, and almost never on what the aria or the scene is about.  They rarely understand any of the dramatic content, the character, the relationships.  Invariably this means the singer has no real connection to the music and the result is dull and academic.  It’s uncanny how when a singer understands what is compelling their character to sing, the relationships, the dramatic conflict, and learns to sing with their head, heart and guts, the voice opens up and real singing power can be achieved.  It can be startling.  My approach, methods and exercises are designed to unite the imagination with physical expression, as well as to encourage emotional commitment to the music, character and story.

I saw my first opera at the age of 12 and the following year I performed and sang in four operas professionally.  I have seen first-hand the value of good storytelling and excellent acting  in operatic performances all over the world and conversely I have also seen why performances do not work due to poor or minimal acting skills at hundreds and hundreds of performances.  Combining my life-long knowledge of opera with my very deep understanding of acting and performance I have successfully trained many singers with my story-based approach.

As an actor, I worked in the West End of London, in repertory throughout the UK and Europe as well as television work and countless advertisements in the UK and Europe.  My theatre direction training was with Michael Gordon, a noted American theatre and film director whose work included many Broadway productions and in Hollywood directing the film Cyrano de Bergerac with Mel Ferrer and numerous well-known films in the 50s and 60s including the romantic comedies Pillow Talk and Move Over Darling.  At the Bristol Old Vic Theatre School, I trained as an actor with perhaps the greatest acting teacher of all time, the legendary Rudi Shelly who numbered among his students Patrick Stewart, Jeremy Irons, Daniel Day-Lewis, David Calder, Stephanie Cole, Alex Jennings, Sophie Thompson, Anthony Hopkins and many others.  My training is a combination of Rudi’s teachings adapted for the opera house, as well as the work of many other fine teachers I was lucky to study with including the brilliant Michael Gordon.

Acting in opera should be completely integrated with the singing and support and empower the work of the singer.  It should be as effortless as possible to provide a safe harbour for the singer to sing at their best while creating a fully satisfying performance.

Here is Swiss Basso Roger Krebs singing Daland from der fliegende Hollander.  In private lessons we worked on bringing imagination into the storytelling, the character and the intriguing relationships between the Dutchman, Senta and her avaricious father Daland.  Roger has a contract singing in Germany now, thanks in part to the work we did on this aria which he was able to send to Intendants and Casting Directors.

I particularly enjoy helping excellent singers move ahead professionally.  A number of fine singers have come to me when their careers have stalled and they are unable to move up the operatic ladder.  I find with time, careful work on acting and presentation as well as a professional understanding of what actually happens in an audition, I can and have made a difference and helped a number of singers restart their careers.  Watching this happen has been hugely rewarding part of my work.